Which is your idea of fun family time?

A) At home, grilling with family
or
B) Waiting with strangers for your pager to buzz

Sparkle was created specifically for those homeowners and property managers who pride themselves on balancing time, energy and money. While the BBQ grill has traditionally been male-dominated, more women are “firing up the grill” out of necessity as their husbands are not home from work when it is time to start cooking. The last thing that these housewives want to look at just prior to cooking is a dirty, nasty grill.

Not only do women realize, more than men, the harmful effects and dangers of a grease-caked BBQ grill; but also women don’t want to encounter the unsightly appearance and potential embarrassment of a dirty BBQ grill when friends or family visit. Many men, on the other hand, believe the old adage, “Out of Sight, Out of Mind.” They recognize that the BBQ grill must be cleaned, but they usually just close the lid deciding to clean it later.

The price of the BBQ grill by itself pales in comparison to the overall budget of the entire project. Most of these outdoor kitchens are constructed near the swimming pool as a focal point. To have this advertised amenity sit dormant due to broken parts or an unsightly appearance could have a negative effect on prospective buyers or residents.

This is where Sparkle Grill Cleaning can assist the busy, time-strapped family. Licensed and insured, Sparkle’s two man crews will arrive complete with the tools of the trade to restore that BBQ grill’s appearance or with the parts to make it fire up again! 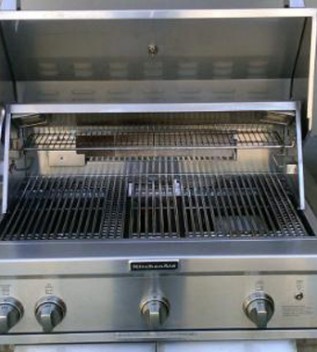